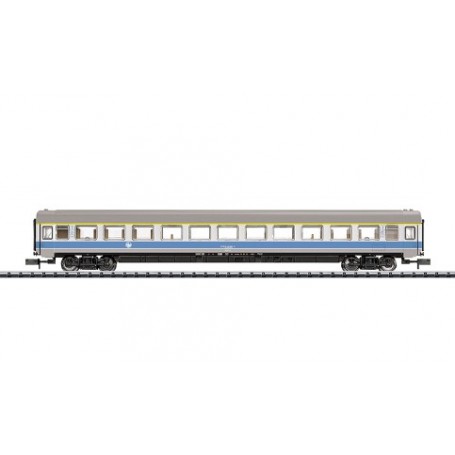 The car has a close coupler mechanism. A lighting kit can be installed in the car. Length over the buffers 165 mm / 6-1/2'.

The EuroCity (EC) 10/11 'Mimara' celebrated its premiere on June 2, 1991 between Munich and Salzburg with the start of the summer and the annual schedule. It ran for the first time on the route Munich Zagreb. The Yugoslavian painter, restorer, and art collector Ante Topi Mimara (1898-1987) served as its namesake. Five financially, completely independent firms were responsible for the Yugoslavian rail system even before the dissolution of Yugoslavia. They were headquartered in Zagreb, Sarajevo, Belgrade, Skopje, and Ljubljana. The 'Association of the Yugoslavian Railways' in Belgrade served only as an umbrella organization, which is why the Zagreb Railroad Administration for the Yugoslavian State Railways (Jugoslovenske eleznice J) purchased new, extremely comfortable cars just for this train, cars that are still used today in the best train connections out of Zagreb: These are 26.4 meter / 86 foot 7 inch long air conditioned open seating cars for 1st and 2nd class. With a paint scheme in powder blue / light gray there was moreover a special color scheme created just for these cars. The Croatian State Railways (H Hrvatske eljeznice) and the Slovenian State Railways (S Slovenske eleznice) that came into being with the dissolution of Yugoslavia initially kept the paint scheme variation as well as the cars for the EC 'Mimara'. With the start of the summer schedule for 1993, the EC 10/11 'Mimara' was extended to Leipzig and promoted to one of the 'star trains' on the so-called Frankenwald rail line. This was surely if nothing else thanks to its exotic cars and motive power in the form of a class 103 electric locomotive. Starting in 1996 the routing for the 'Mimara' was even extended to Berlin. With the introduction of the ICE line Hamburg Berlin Munich the routing of the train from Berlin to Munich was discontinued starting in 2000 and the 'Mimara' terminated again in Munich. Unfortunately, the DB did away with almost all train names with the change of schedules in 2006 and there was no longer an EC 'Mimara' in Germany anymore.