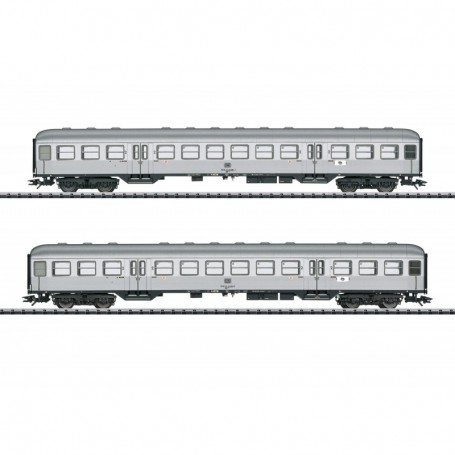 Model
The minimum radius for operation is 360 mm / 14-3/16'. The underbodies are specific to the car types. The trucks have conventional brake shoes. Both cars have factory-installed LED interior lighting. Downpipes and switchman's steps are included. Total length over the buffers approximately 57 cm / 22-7/16'.

Prototype
Two German Federal Railroad (DB) fast train passenger cars, known colloquially as 'Silberlinge' / 'Silver Coins'. Both cars 2nd class. Fast train E 2002 from Ludwigstadt to Saalfeld. The cars look as they did at the end of the Seventies.

The class 95 steam tank locomotive with oil firing to go with this car set can be found in the under item number T25097.