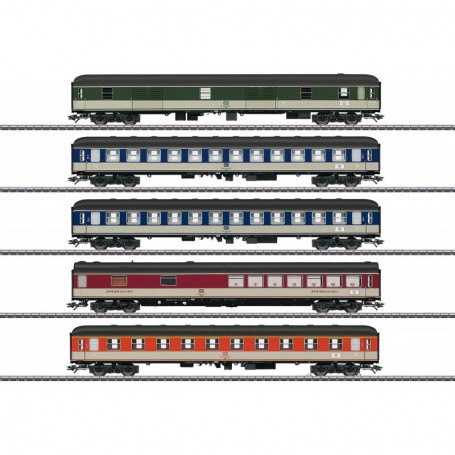 Model
The minimum radius for operation is 360 mm / 14-3/16'. The underbodies are specific to the car types. The trucks have conventional brake shoes and separately applied generators. All of the cars have factory-installed LED interior lighting and operating current-conducting couplers. The dining car also has lighted table lamps. Maintenance-free, warm white LEDs are used for the lighting. The 73407 marker light kit can be installed on all of the cars. The type Aüm car has built-in marker lights and a pickup shoe. Total length over the buffers approximately 142 cm / 55-7/8'.

Pop Cars of the DBAt the end of the Sixties, the German Federal Railroad had a new color concept developed, because up to that time locomotives and cars were painted exclusively in single colors. Now a paint scheme was to have a friendlier, more modern ef

The class 220 diesel locomotive to go with this car set is offered under item number 37807 exclusively for the MHI.

In the Spirit of the Seventies