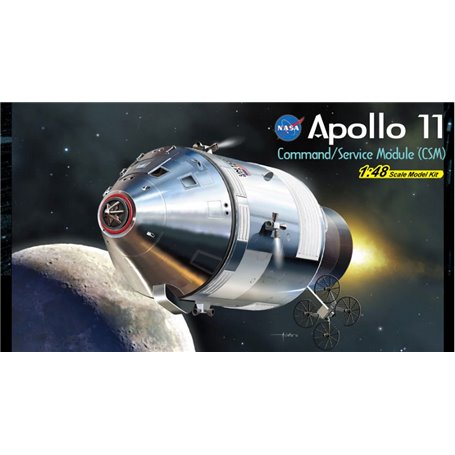 Apollo 11 is probably the most famous space mission of all time, this historic spaceflight first putting man on the Moon more than half a century ago. The event occurred on 20 July 1969 as millions of TV viewers around the world watched with bated breath. The Lunar Module (LM) known as Eagle safely landed on lunar soil for the first time. In the meantime, the Command/Service Module (CSM) was orbiting the Moon high above aboard. The CSM was named Columbia after Columbiad, the giant cannon-shell craft that was fired to the Moon in Jules Verne’s novel “From the Earth to the Moon”. After the Moon landing, Eagle’s ascent stage successfully docked with the CSM before the crew began their return voyage to Earth.

Dragon’s Space Collection is now proud to offer a 1/48 scale plastic kit of the complete CSM, and it comes hot on the heels of an earlier release of a fully built-up and finished version. This large scale permits a stunning level of detail to be incorporated on the Apollo 11 module. The craft’s sharply molded in plastic and it also features additional items such as photo-etched radar antennas to give a touch of refinement. The CSM comes with accurate markings and logos on an accompanying set of decals. Thanks to the sleek metal display stand, the model can be readily displayed to full effect on a desktop. Space modelers are bound to be over the moon with the launch of this new 1/48 scale Apollo 11 CSM kit!