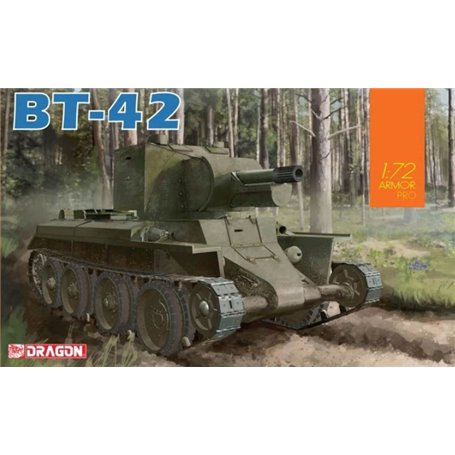 Used in Finland during the Continuation War (1941-44), the BT-42 assault gun was something of a hybrid designed to overcome Finland’s shortage of AFVs. It mated hulls from captured Soviet BT-7 Model 1937 light tanks with British 4.5-inch howitzers. These QF 4.5-inch Mk.II guns had been donated to Finland when it was fighting Russia during the Winter War (1939-40), and they were fitted in newly designed turrets. They entered service in 1943. It is a completely new subject in the 1/72 scale Dragon Armor Pro series. It features brand new tooling that have been leveraged for the best possible levels of accuracy and easy assembly. The upper hull, lower hull and turret, for example, are all produced as one-piece components via slide-mold technology. The whole plastic kit is a perfect blend of detail and convenience. This is exemplified by the one-piece DS tracks, which are even detachable just as they were on the original assault gun. Although the novel BT-42 was a desperate Finnish design used in combat during WWII, this kit marks the exciting start of its new modeling career.