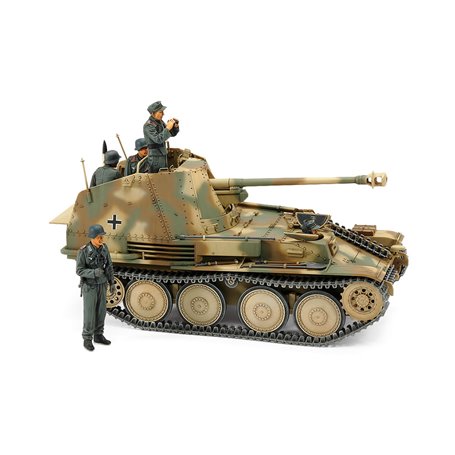 Called to Normandy
The Marder III M was the last of three German tank destroyer variants based upon the captured Czechoslovak 38(t) tank, and sported a powerful 7.5cm gun in an open-top fighting compartment. As the Allies pushed on from their Normandy landings in June 1944, Marder III Ms were on the scene in a largely defensive struggle against enemy armor.

?The distinctive, compact form of the AFV is captured with aplomb.

?12 depictions of shells are included, and can be stowed in the rack.

?Features a photo-etched part to capture the muffler cover.

?The Marder III M form is captured in style, with figures in realistic pose providing a real sense of action.

?The latest scanning techniques were used in the creation of officer, gunner and loader figures.

?At the rear, a photo-etched muffler cover adds detail. This image shows two of the crew in action pose

?The Panzer grenadier is depicted standing outside of the AFV, with helmet donned and a slung MP40.