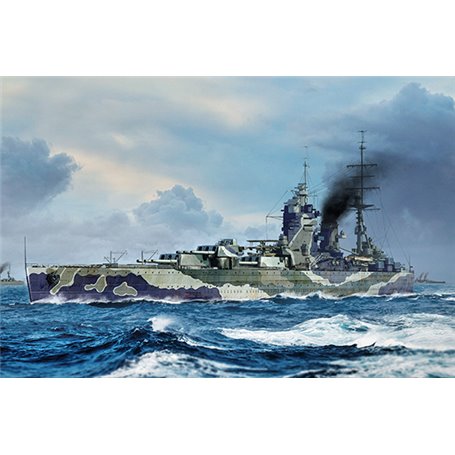 By buying this product you can collect up to 449 points.

During World War II, HMS Rodney than its sister ship HMS Nelson, better known 1940 HMS Rodney and HMS Nelson join the Norwegian campaign, and rounded up German pocket battleship DKM Sher will the action April 1940 near Bergen, Norway by German bombers, and wounded. May 27, 1941, HMS Rodney took part in the action to surround and annihilate the German battleship DKM Bismarck. Battle, Rodney has lost the ability to effectively fight back the Bismarck fired over 380 rounds of 16-inch shells.

Soon, HMS Rodney to the Mediterranean as a convoy escort mission to Malta together with the HMS Nelson escorting combat. The end of 1942 to 1944, with HMS Nelson No. join the landing in North Africa, Sicily, landing, and support the Allied landing the Italian territory. HMS Rodney 1944, the unprecedented scale of the Normandy landings, is one of the landings spent six battleship.