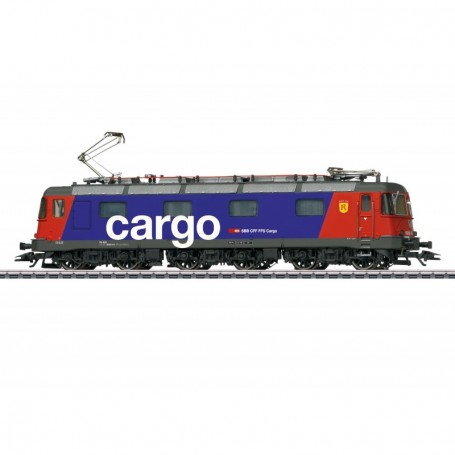 By buying this product you can collect up to 3924 points.

Model: The locomotive has an mfx+ digital decoder and extensive sound functions. It also has controlled high-efficiency propulsion with a flywheel, centrally mounted. 4 axles powered (both axles in each of the outer trucks) by means of cardan shafts. Traction tires. The triple headlights and 1 white marker light (Swiss headlight / marker light code) change over with the direction of travel, will work in conventional operation, and can be controlled digitally. The headlights at Locomotive Ends 2 and 1 can be turned off separately in digital operation. When the headlights are off at both ends, the double 'A' lights are on at both ends. The lighting can be switched to 2 red marker lights. Long-distance headlights, cab lighting, and engine room lighting can be controlled separately in digital operation. Maintenance-free warm white and red LEDs are used for the lighting. The locomotive has separately applied metal entry grab irons. The couplers can be replaced by detailed end skirting. The minimum radius for operation is 360 mm / 14-3/16'.Length over the buffers 22.2 cm / 8-3/4'.

Prototype: Swiss Federal Railways (SBB) class Re 6/6 as the class Re 620 heavy electric locomotive, used for the SBB Cargo freight service area. Version in a 'Fire Red' / ultramarine blue basic paint scheme. Rectangular headlights, UIC plugs, diagonal grab irons on the ends, a maintenance hatch on one side for air conditioning. Locomotive road number 620 011-7, with the locomotive coat-of-arms for 'Rüti ZH'. The locomotive looks as it did around 2019.

It was and still is something special the Swiss Federal Railways (SBB) Re 6/6. For a long time it was viewed as the most powerful electric locomotive in the world and still has this rating in Switzerland. Naturally, such a high performance as 8,020 kilo

This model can be found in a DC version in the Trix H0 assortment under item number 22883.

First time to include a central motor and 4 axles in the outer trucks powered by means of cardan shafts.Frame and body constructed of heavy metal.

World of Operation mfx+ digital decoder and a variety of light and sound functions included. Long-distance headlights, cab lighting, and engine room lighting can be controlled in digital operation.