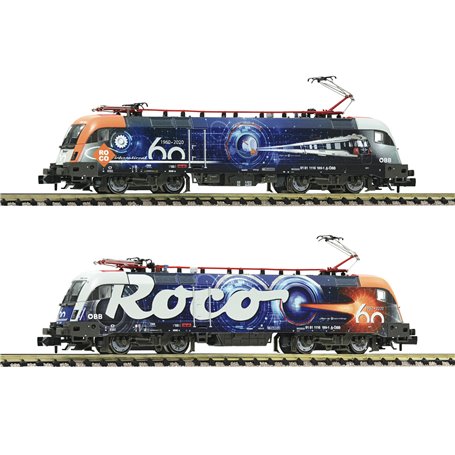 By buying this product you can collect up to 2150 points.

Due to multiple requests by N-gauge railway enthusiasts, the “60 years of ROCO” art locomotive has also been introduced into the product range 2022 for them, too. The company created the delicate design of the Taurus locomotive again in collaboration with the outstanding artist Gudrun Geiblinger. The locomotive symbolises the bridge from the founding of ROCO with children's toys production, such as the well-known sand bucket, to today's masterpieces of the model railway world. "60 years of ROCO" means six decades of innovation and state of the art model building on a small scale, but at the same time in an exquisite style. And of course, the most important brand logo is included: The well-known ROCO lettering in its transformation from the past right up until today.