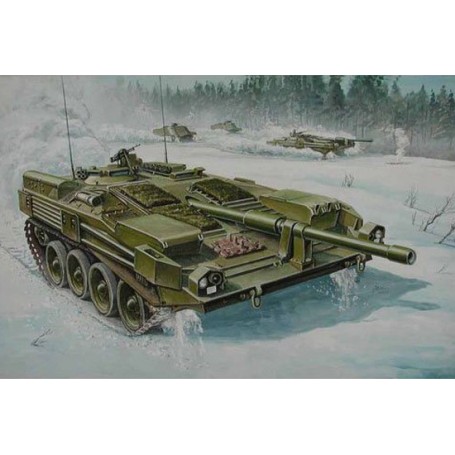 By buying this product you can collect up to 289 points.

Sweden Strv 103B MBT?The Swedish made S Tank first entered production in the 1960s. Labelled by some as a tank-killer rather than a main battle tank, the S tank was new in design as a turretless tank that underwent a REMO (renovation and modification) in later years. The Strv103B was the main version of the S tank at in its early years (1970-1984). The Strv103B was based on the S103 with, but with a REMO. This REMO included a laser rangefinder coupled to the driver/gunners sight, a new diesel engine, a new transmission, diesel jerrycans mounted on both sides of the tank and LYRAN illumination flare mortars. A series of tests showed that the Strv103B was more accurate than the M60A1E3 and well suited for both offensive an defensive action. About 300 S103B were made which were later replaced by the more powerful and capable Strv103C version in 1984.