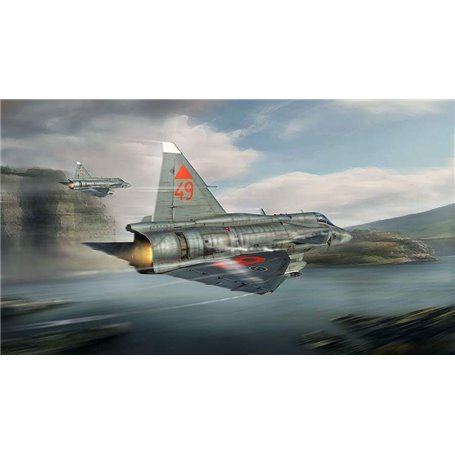 By buying this product you can collect up to 385 bonuspoints.

For more than 50 years, the Saab 37 Viggen has graced the European skies. Today, it continues to fly with the Swedish Air Force Historic Flight. However, there hasn’t been a new kit in 1/72 scale of this wonderful aircraft for over 40 years. That is about to change!

Tarangus and Special Hobby jointly released a new Viggen kit in 1/48 scale a few years ago. A kit that won “Model of the year” from the German magazine model fan and has been praised by builders around the globe. Now, that kit has been scaled down to 1/72. You will recognise all the crisp and wonderful detail from the larger kit, that’s not all.. An extra level of detail has been added, with for instance separate flaps for the canards, different canards for the attack and fighter versions and a first for a Viggen in any scale, a RAM air turbine!