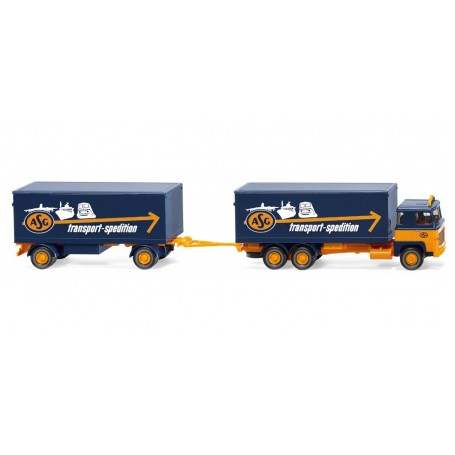 By buying this product you can collect up to 369 bonuspoints.

Fans of forwarding companies have long been waiting for this: The Scania 111 finally pulls up in the colours of the ASG forwarder. The popular cycle of Swedish themes keeps growing with the inclusion of the traditional ASG forwarding company. The latest addition is a five-axle tractor-trailer combination - with authenticity galore. The lorry with trailer has a wonderfully contemporary look, as it harks back to the 1970s when the traditional model makers first started miniaturising the original in an effort to delight model fans in Sweden with prototypes that are typical of their country. The ASG design has been a recurring theme at WIKING since 1975, particularly because the striking design of Swedish origin began to dominate the roads in Europe with every new location in their network. The Aktiebolaget Svenska Godsbilcentraler company was founded as early as 1935 by the Stockholm Rederi AB Svea company. After collaboration with Danzas was agreed back in 1993, ASG was taken over in 1999 by the Swiss company Danzas, which is now part of Deutsche Post AG.