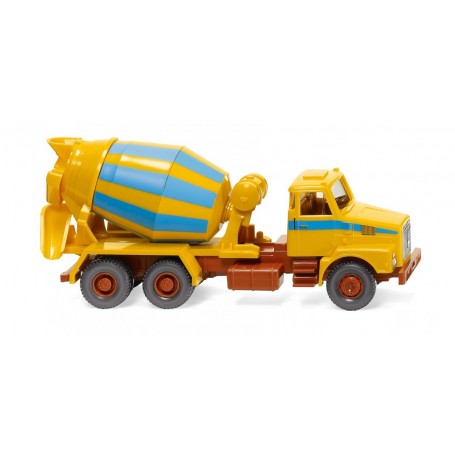 By buying this product you can collect up to 225 bonuspoints.

The Swedish construction site bonnet truck in its best role

With this three-axle bonnet truck WIKING is rolling into the product range a construction site classic that feels visibly at home in its new role as a 1:87 miniature. In fact, after its unveiling in 1973, the Volvo N10 quickly became a chassis choice that ready-mixed concrete businesses preferred to order for their vehicle fleet. The bonnet truck with its bicolour drum has a wonderfully contemporary look, as it harks back to the 1970s when the traditional model makers first started miniaturising the original in an effort to please model fans in Sweden with prototypes that are typical of their country. And for good reason: Since the 1950s, Sweden had been a solid and reliable export market for the traditional model makers, who managed to devise a product with this vehicle that offered model and railway fans in Sweden another true-to-scale home model. The fact that it now rolls into the selection as a three-axle chassis shaped in new moulds demonstrates yet again how WIKING has perfected the process of combining old with new moulds.