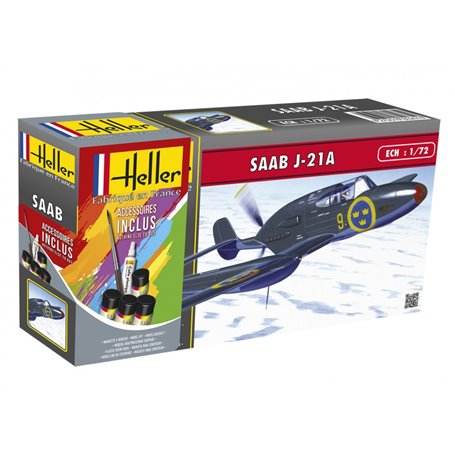 During the 2nd World War, Sweden, a neutral country, had no option of acquiring modern aircraft from abroad. In 1941 the SAAB engineer Frid Wänström introduced the concept of a fighter aircraft with tricycle landing gear equipped with a propeller powered by a V-12 liquid-cooled engine. The Air Force first of all rejected the proposal. But in December 1941, it was given the green light. At the same time Sweden was negotiating with Germany for the purchase of Daimler Benz engines and the production license for them. The purchase of more than sixty DB 605B engines of 1475 hp and of the license was finally concluded in 1943. In fact, the first Swedish engine itself would not be delivered until after the war. The J 21 appeared to be very advanced for its time: a neat cell flanked by two beams containing the main landing gear, laminar aerofoil, and ejector seat. The first of the three prototypes made its maiden flight in July 1943. However, the first machines of the series would not be delivered until 1945. In 21 years a total of 298 machines would be produced in five successive batches. The SAAB J 21 would serve from 1946 to 1954. Despite suffering from a lack of engine cooling on the ground, due to the position of the propeller, and less agile in aerial combat; it would prove to be a good shooting platform, easy to take off and land. For that reason it would be quickly adapted to the role of fighter-bomber. Due to its new role, the J 21A-3 would be designated in units such as A 21 (A = attack) or even B 21 (B = bomber).