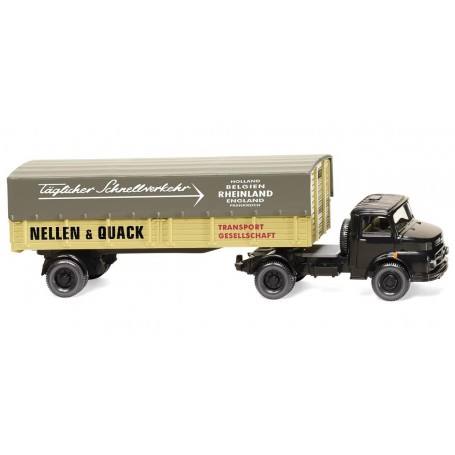 Short bonnet semi-trailer in the colours of Nellen & Quack

The semi-trailers with Mercedes-Benz short bonnet tractor units were not common on the West German road traffic scene of the 1960s. Although the benefits of the rapid change of semi-trailer and the high degree of flexibility were evident, many forwarding companies hesitated. The Nellen & Quack forwarding company was more forward-thinking, and deployed a short bonnet with flatbed semi-trailer very early on. Carl Hermann Nellen and August Quack had founded the company in Rheydt in 1884. Post-war reconstruction began in 1948, and 7000 square metres of storage space and a respectable vehicle fleet were available in 1958. During the years of the German economic miracle, numerous generations of lorries, including the short bonnet semi-trailer now miniaturised by WIKING, joined in the boom. After Nellen & Quack had belonged to the BTL group for many years, in 2008 Heiner Hoffmann acquired all the shares, and with its team recreated a medium-sized, owner-operated company once more under the name of Nellen & Quack.