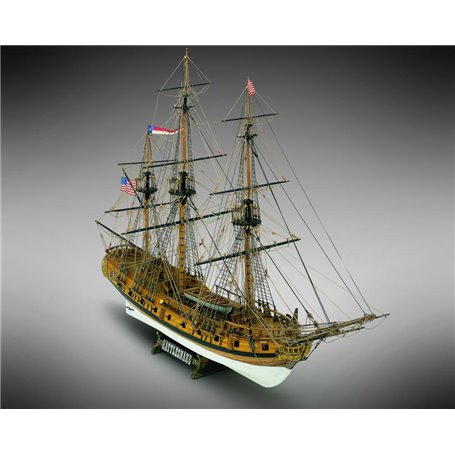 The privateer ship RATTLESNAKE was built at Plymouth, Massachusetts, In 1779 or 1780, allegedly to designs by John Peck. She was owned by John Andrews and her captain was Mark Clark. At various times she carried from 1 4 to 20 guns and her complement consisted of 85 men. She received her first commission on 12th June 1781, but she may have been commissioned earlier. She was captured off the American coasts in 1781 by the British 44-gun ship ASSURANCE. She was taken to England, where she was renamed CORMORANT and her lines were drawn. Her original lines survive on file at the National Maritime Museum at Greenwhich. With her reduced deadrise and her very sharp fore lines the RATTLESNAKE must have been very fast. She had a detached forecastle and quarterdeck, linked by gangways, which were unshipped dqring the battles. In August 1783 she was again named RATTLESNAKE.